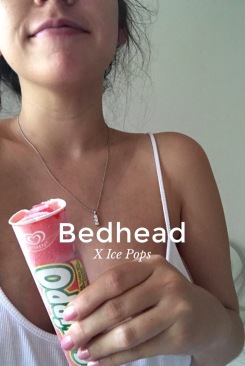 I’m celebrating the New Year with breakfast in bed and icy pops in total silence.

How was your New Year’s?

It’s been a really hot couple of days over here. Unbearably hot! I may have mentioned that I hardly sleep due to the pregnancy, did I? Well, I don’t sleep much, which is ok! But when the thermostat hit the high 30s the last few days and refused to drop back down during the evenings, I got so uncomfortable. Honestly I spent all night and early morning of New Year’s Eve Eve staring at the weather app on my phone haha. I’ve always run a little warmish, in Traditional Chinese Medicine this is known as having excessive internal heat, and that last night definitely finished me off.

I woke up on New Year’s Eve voiceless which was terrible timing since we had a whole bunch of people coming over. I figured I’d spend the day just listening but it seems that some days the more you want to listen to people, the more they want to hear you speak. This was even after B had gone around to everyone stating firmly that I had completely lost my voice and couldn’t speak. Oh well. The people want what the people want. I stuck everything drinkable in the chiller to keep my voice croaking on. I was so miserably tired from not sleeping, feeling so horrible with my painful throat and just completely under the weather that I felt like I might weep. That’s when I excused myself for 11 minutes to go meditate. I say to people all the time that meditation helps. Sometimes I forget that I should add, “But you need to keep at it.” So even though I had meditated at 3:30 am when the weather app said it was 34degrees (celsius so people who live in farenheit countries aren’t like, “What is your problem?” haha) I obviously needed to give myself some kind of boost. And it did the trick! My throat was still a little sore but my voice felt stronger and I had enough energy to get me through the afternoon until everyone went home happy with full bellies. Awwwww…..

In the evening time B and I just hung around at home nibbling on leftovers, watching the last bit of Home Alone. And staring at the baby bump. I don’t know if other parents are like this but we’re obsessed with staring at it. We watch it the way people watch movies. Also, is it Christmas if you don’t watch Home Alone?! B and I are the same age so even though we didn’t know each other back then we both remember watching Home Alone as kids thinking, “I’d so do that.” The weather was starting to cool down and even get windy so just before the midnight fireworks we drove down to the beach to hang out for a while. On the way home we picked up some icy pops which I had BIG NEW YEAR’S DAY PLANS FOR.

The oatmeal I didn’t even have to cook. Well, I cooked it the day before and because I never get the portions right, I just stored what was left in the fridge to have with fresh strawberries in the morning, cold. SO GOOD. 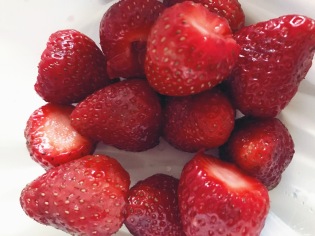 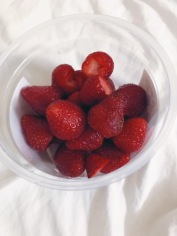 I’ve been asked a few times how to cook oatmeal. ??? Usually the packages that the oats come in will say something like cook for 5 minutes. There isn’t much to it but I know that a lot of people really have no confidence when it comes to anything beyond boiling water for tea. No worries!

Whole rolled oats – these days you can even get organic. Let’s say a handful per person.

Enough water to cover the oats in a small saucepan.

I like to add a good shake of ground nutmeg and cinnamon when I’m cooking the oats.

Bring the oats in the water to a gentle boil, keep it on a low heat – oatmeal tends to bubble up really quickly and then spill over all over your stove when you turn your back on it. So keep the heat low so you don’t miss it. When the oatmeal starts to bubble, keep stirring so it doesn’t stick, you might add a little more water if you feel like it looks dry. Once you can’t see the water separate from the oats, that’s it. It should look like flaky mush. Makes sense? Let’s say it should be done in around 3-5 minutes. You can’t OVERCOOK oatmeal although it could dry out. 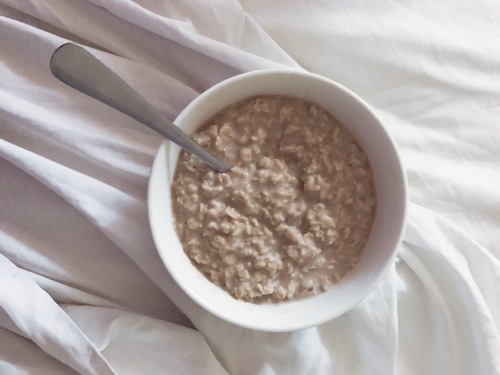 To serve you can add honey or maple syrup and a splash of your choice of milk. You could cook the oatmeal in milk instead of water to make the oatmeal extra creamy.

Like I said, if you made too much, it’s fine! Just put your leftovers in the fridge. Easy.

Do you have any resolutions for this year? I wrote something last year about having a Peaceful New Year’s Eve . I was thinking to myself yesterday that even though I’m bringing in the New Year not feeling 100% that everytime my baby kicks, it makes me smile and I have no complaints. There have been some moments in 2016 that were really, really tough and horrible but there have also been many moments of joy. Isn’t that just life though? I think overall I faced things as peacefully as I could and I’ll try harder again this year. Every year I get a little calmer and at ease with peace, I hope!  I think if I had just one resolution to make this year it would be to just focus on being the kind of person that I look forward to spending time with.

And that person would conveniently have messy hair and eat icy pops in bed hehehe.

Make that REALLY messy hair. I’m wearing a cheap cotton knit dress that I found in KMART for $6. So comfy for sleeping! Although as my bump gets bigger, the dress gets shorter. It’ll be a singlet by the time the baby is due. 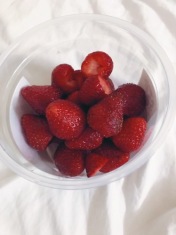 Green eggs and ham
finished teaching last class of the week 🧉 dinner, maybe a tea and bed 🌙
A realistic #thatgirl or more accurately #thatmum aesthetic reel 😂
Screenshot of my photo library and my aura piccie 🤙💕
After this I really need to unpack my last suitcase, I think my hairbrush is in there. And then I'll cook rice for dinner. Go for a walk. Review some notes. Etc etc
Back to figuring out a few more practices. I'll try to upload this one on my website over the next few days so you can add it to your life 💕✌🏼
.
Checking in, how you doin'
Festive stretch ♾ if you could please just do some stretching today just for five minutes, that would be great for all of us. And drink water.
Loading Comments...
%d bloggers like this: