“These are amazing. What did you put in here?” he mumbled through a mouthful.

There are certain things that you can’t get at Chinese restaurants. You gotta go to someone’s home, sit in their kitchen and watch as wheat noodles are boiled, drained, tossed in sesame oil and then stir fried with some simple vegetables.

I don’t even like noodles! So go figure. Ok that is a huge generalisation – I like rice noodles, spaghetti and those glass noodles made of green beans. But when my mum cooks noodles this way, I can’t get enough.

Vocab:
超级 (chāo jí) Super/Ultra
简单 (jiǎn dān) Simple
清炒 (qīng chǎo) Stir Fry
面 (miàn) Noodles! (the character doesn’t include the exclamation point but I just get really excited talking about food)
Doesn’t matter how many times I read the instructions on the back of the packet, I’ll always cook noodles for a small group of 10. Come over for dinner?
Or do it yourself:
1. Cook appropriate amount of noodles (ahem)
2. Drain noodles and toss with sesame oil and let cool, lift the noodles to let the steam escape. You don’t want the noodles to stick together. THIS TAKES AGES. Alternate arms and repeat.

3. Stir fry veggies – heat the oil, then add in your crunchy veg, the less crunch stuff and then your flavourings.

(OIL, CRUNCHY, LEAFY, SAUCEY or OCLS which is not helpful at all, sounds like some kind of college and actually makes things worse?)

I like using coconut oil and then for flavouring I add chilli, white pepper, sea salt. I like my food light but you can add soy sauce of course. Also, I can’t eat too much soy products. IF you were to use soy sauce, get yourself a good quality ‘Light Soy Sauce’. Don’t just grab that bottle of soy sauce with the red pouring cap thingy, there is an entire world of soy sauce out there. I used to take people on tours of Asian supermarkets and we stood in the sauce aisle for ages discussing all the different flavours you can make. A world of soy sauce.

Tip: When stir frying veg, you want the pan to be HOT and you want to move FAST so the veg still says crunchy and the colours stay vibrant. Leafy greens can be thrown in last as they will cook so quickly.

I love when I get a bit of char on my veg. Just a little, not too much. It’s either a sign of a good hot wok OR a wok that needs washing. Let’s all agree it’s the first thing, ok?

Another tip: When adding your liquid flavourings, such as soy sauce, pour AROUND the sides not onto the stuff. And don’t go crazy, you can check later when the noodles go in if you need to add more to adjust the flavour. You want to be able to taste the strands of noodles that you just spent forever tossing with sesame oil. Not a mouthful of light soy sauce. The noodles are THE MAIN EVENT.

Oh, my mouth just filled up with saliva. Man, I love food! 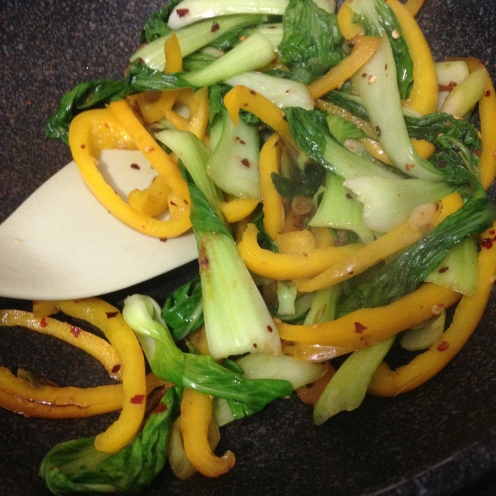 4. Hurl everything together in the pan and toss somehow. You may want to add more sesame oil. The sesame oil just makes the noodles SO fragrant and helps with movement.

Oh, remember that sauce aisle? Get yourself a good quality sesame oil too. You should be able to SMELL the fragrance wafting from a sealed bottle. And it should smell like nothing on earth compared to the regular cheapo version.

I’m not asking you to sit down in the middle of the supermarket and taste test all the different varieties of sesame oil. Just have a sniff, don’t get the bottle too close to your snoz because that grosses people out. Once you get yourself one that smells amazing you’ll know exactly what I’m talking about and you will look back at the cheapo one you used to own and laugh and move on to bigger and better and brighter things.

Confession: My noodles were still a tad clumpy, I was too slow to get them out of the boiling water and I needed to let them cool a little longer but I was HUNGRY and my arms were bored with tossing. So it was go time! Hahaha. They were still AMAZINGLY tasty. This is meant to be an easy fool-proof recipe for hungry/lazy anyway, and turns out, IT IS! Trust! You WILL be triumphant, no matter what!

If you have leftovers, they taste so good chilled!

Here’s another version that my mum did whilst she was in town to visit me. She used shredded omelette with shredded carrot and a little bit of spring onion. Again all done with the above steps and it was AMAZING. I want my Mommy now. And I want those noodles back in my life right now. Excuse me whilst my heart and stomach have a quick weep. Pretty much the best meal of my life. (I know, could I BE more dramatic?)

Those prawns were the size of my plate and they were so good and also they were about $10 each. I’ve never spent that much money on something that came wrapped up in A LEAF. But they were SO GOOD. Saving up my pennies to one day buy one more.

*DROOLS ALL OVER KEYBOARD AND SHORT CIRCUITS LAPTOP*

Ok, if you think shredded omelette is a great idea but who can be bothered, just fry an egg and slide it on top. I love when the yolk is still a little gooey and it MINGLES with the noodles.

Or just you know, whatever. They’re good any which way.

Plainish; with shredded chicken (or really just one shard because I got really lazy and really hungry); or with a fried egg.

It’s 9:30 in the morning and I must go get myself some noodles for breakfast. According to TCM it’s great to have warm meals.

Don’t quote me, I WILL manipulate random pieces of information to suit my wants. (I call these my convenient theories, of which I have many)

And right now noodles: I WANTS IT.

Enjoy and chat later! If you tried making these, lemme know! xx

How was your weekend? We took it really easy, it’s my first weekend back in town so naturally we had loads of laundry and chores to catch up on. The last thing I want is to then have to drag myself out for dinner but I also don’t want to expend my remaining energy on making dinner but I want home food.

This Spicy Vegetarian Cous Cous Goreng has been a breakthrough over here. I always have a few random odds and ends hanging out in the veggie drawer of the fridge. When I make cous cous I can never make just the right amount there’s always an extra container of it. I keep a few spare packets of spice paste so all I do is just grab everything and throw it together and dinner is done! It’s so satisfying and warming, best of all you can just make it in the one pot and that’s as good as it gets, washing up wise.

So so easy! It’s my new favourite way to have cous cous. And you can sneak in all those vegetables.

A packet of spice paste (don’t be afraid to try other flavours too! Great ones to use are green/red/yellow curry paste)

Chopped veg (the softer the vegetable, like leaves, the less time it needs to cook)

Options: fried egg, shredded meat, or leave out to keep it vegetarian

And yes, I am using my rice cooker to cook dinner. There’s no gas for my stove but I will always find a way hahaha.

Green eggs and ham
finished teaching last class of the week 🧉 dinner, maybe a tea and bed 🌙
A realistic #thatgirl or more accurately #thatmum aesthetic reel 😂
Screenshot of my photo library and my aura piccie 🤙💕
After this I really need to unpack my last suitcase, I think my hairbrush is in there. And then I'll cook rice for dinner. Go for a walk. Review some notes. Etc etc
Back to figuring out a few more practices. I'll try to upload this one on my website over the next few days so you can add it to your life 💕✌🏼
.
Checking in, how you doin'
Festive stretch ♾ if you could please just do some stretching today just for five minutes, that would be great for all of us. And drink water.
Loading Comments...